You are browsing the site archives by month.
03Feb 2017

In September 2016, FEA started its spoken English course for about 20 young cyclists, who had come from all around India to coach and prepare for 2020 Olympics. At FEA, we call them, ‘Future Olympians’.

Every Saturday and Sunday one of FEA staff members goes to the Indira Gandhi International Stadium and teaches them English using the FEA program. These are 14 -18 year old students who have been identified and selected from Andaman & Nicobar, Jammu & Kashmir, Sikkim, Manipur and other parts of India to be groomed and trained to compete in 2020 Olympics to be held in Japan. These students reside in the hostel of the stadium, train for 4 hours in the morning, then go to a regular school and train again for two hours after school. Having studied in rural schools, none of the students could speak English and were finding it difficult to cope with schooling and life in Delhi. So FEA got involved. For Future Olympians, the FEA classes are held between 10:00 am- 1:00 pm on the weekends given their gruelling school and practice schedule. They are super naughty, a bit stubborn, hyper active and eager to learn something new. Their early morning practice leaves them tired, still when they enter the class their faces light up at the thought of mischief and tricking the teacher. 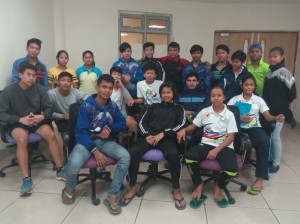 In November it was my birthday. Usually, birthdays are mere annual events – they come and go. However, sometimes the people around us make it so special that its etched in our souls for years to come.

On my birthday last year, I was showered with blessings, calls, messages, Facebook posts and so on. Still I was missing home and had to hold back my tears time and again. When I went to teach the Future Olympians, things struck me as odd. All of them were already in conference room where the classes are held (usually they  trickle in slowly after the class begins). All were grinning from ear to ear with mischief in their eyes. As I opened the door, I was greeted with a chorus of “Happy Birthday ….”by the 23 Future Olympians, their Senior Coach Amar Singh (international cycling coach, an Arjuna awardee) and other coaches of the Cycling Federation of India. There were ribbons and balloons, bouquet, tea, biscuits, juice and, in the middle of the room, on the table a big birthday cake.  I was overwhelmed with emotions, stunned to do or say anything.

I consider it my good fortune to get respect and love from these students, who practice from 5:30 in the morning irrespective of weather, fatigue and sickness and go to bed only after midnight.  They go to a regular school, where many of them are struggling due to their inability to communicate in English. After the celebration, I went to thank Coach Amar Singh and modestly said, “Sir, there was really no need for this. Your blessings were more than enough….”  He responded with, “I have seen these kids evolve from in-disciplined teenagers to dedicated youngsters, in a short span of few months. They have learnt team work and a common language to communicate. It makes them less home sick and bond better with each other. All credit goes to FEA.” I felt pride and humility simultaneously.

These same students all under the age of 17 have set 3 new national records in their cycling meet in December 2016. As I celebrate their accomplishment, I realize what we do for our students, is so little compared to what they give us in return.